Plant of the Week

Plants of the Winter Solstice

Many plants play an important role in many of our holiday traditions celebrating the season surrounding the winter solstice. Winter solstice, occurring on or around December 21st, is the first day of winter, the shortest day and the longest night of the year. To early cultures, the winter solstice was a day of both apprehension and celebration of the cold, dark winter and the promise of longer, warmer days to come.

Deck the Halls with Boughs of Holly

In ancient cultures, the holly tree symbolized the waning sun commencing with the summer solstice and the oak tree symbolized the waxing sun commencing with the winter solstice. The Druids believed holly’s evergreen nature made it sacred and that it remained green throughout winter to keep the earth beautiful at a time when deciduous trees shed their leaves.

Traditional Christmas card with holly and mistletoe. Circa 1880s.

Holly was used for decoration throughout homes, hanging boughs of it over entrances to peoples’ homes or as wreaths of holly that were hung on doors. Placing a ring of holly on doors originated in Ireland. Holly, green with red berries, was one of the few plants still beautiful at this time of year. It gave the poor a means of decorating their dwellings. Decorating one’s home with holly was believed to bring protection and good luck to the inhabitants in the coming year.

The Yule log is a large log that is burned in the hearth as part of a Yule, or Christmas, celebration or with Winter Solstice festivals. “Yule log” may also refer to log-shaped Christmas cakes.

Historically, the Yule log tradition may have included an entire tree or the largest log available to be burned in the fire hearth. Historians believe the tradition was derived from pagan worship rites, representations of health and fertility, rituals asking for blessings and protection, festivals celebrating the winter solstice, or was simply for decoration and practical use.

Some traditions included starting the Yule log fire with the remnant of the previous year's log, to bring prosperity and protection from evil. After the celebration, pieces of the Yule log would be saved to start the fire of next winter’s solstice Yule log. In some European traditions, oak was the preferred species for the Yule log, as it represented the waxing sun, symbolized endurance, strength, protection, and good luck to people in the coming year.

Christmas card displaying the hanging of Amanita muscaria on a door.

The rituals surrounding the use of these mushrooms may have been harbingers of our modern traditions. A side effect of eating fly agaric mushrooms was a rosy, red flush to the cheeks and face, as well as hallucinations. This may have given rise to the representations and unusual abilities of some of the season's figures (i.e., Santa Claus).

Common winter rituals also included the drying and stringing of fly agaric mushrooms near the hearth. Many people all over the world still decorate the family hearth and Christmas tree with strings of popcorn, cranberries, and mushroom ornaments. It is a reminder that many winter solstice traditions have surprisingly long-forgotten histories brought forward into modern festivities.

Mistletoe, long associated with winter holiday traditions, is the common name for several families of poisonous, evergreen parasitic plants that grow attached to and penetrating the branches of a tree or shrub. The mistletoe plant that is commonly used as a Christmas decoration in North America is generally one of a number of Phoradendron species.

The ancient Greeks, Druids, Celts, and Norse revered mistletoe as sacred, having traditions regarding its collection and use for protection, blessing, and medicine. According to some Christmas customs, believed to have originated with Norse legends, couples who meet under hanging mistletoe are obliged to kiss, plucking a single white berry from the bush until the final berry is removed.

Mistletoe attached high in the branches of an oak tree. Photo by Steve Baskauf.

The “Yule tree,”, or Christmas tree, is a decorated tree, usually an evergreen conifer species, such as pine, fir, cedar, juniper, or spruce. The tradition has origins with ancient civilizations in the middle east, Asia, and Europe. Our modern custom flourished in Germany and spread to other European nations and North America in the 19th century. The Yule tree's brightly colored decorations and lights symbolized stellar objects, spirits of those who died, religious events and figures, and provided edible treats.

Cutting a tree for the holidays on the national forest is a family affair.

Many families begin their holiday seasons by cutting their own Christmas tree from the national forests. All you need is a permit purchased from a local Forest Service office and you may cut and remove a tree from designated areas on National Forest land. Also, take a look at these articles and videos:

The annual lighting of the U.S. Capitol Christmas Tree is an honored tradition of more than 50 years. In fact, the “People’s Tree” dates back to 1964 when Architect of the Capitol J. George Stewart, at the suggestion of the Speaker of the House John W. McCormack, established the yearly tradition of decorating a tree on the West Front Lawn. Since 1970, the USDA Forest Service has provided the trees. Each year a different national forest has been invited to provide “The People’s Tree” to celebrate the holidays. The Forest Service also works with state forests to provide smaller companion trees for offices in Washington, D.C.

“The People’s Tree” Lights up the Capitol

The “People’s Tree” lights up the U.S. Capitol. Photo by Tanya Flores, Office of Communications.

A special gift from the Carson National Forest has successfully completed its cross-country journey to Washington, D.C.

Harvested on Nov. 6, 2019, the massive 60-foot blue spruce, known affectionately as the “People’s Tree,” traveled over 2,000 miles and stopped for celebrations in 25 communities before arriving at the U.S. Capitol in late November. Today, the tree stands on the West Front Lawn of the U.S. Capitol Building and is decorated with thousands of handcrafted ornaments made by school children from the state of New Mexico.

The tree was lit Wednesday [December 4, 2019] evening by the Speaker of the United States House of Representatives Nancy Pelosi during a public tree lighting ceremony on the West Front Lawn.

Read more about the "The People's Tree"… 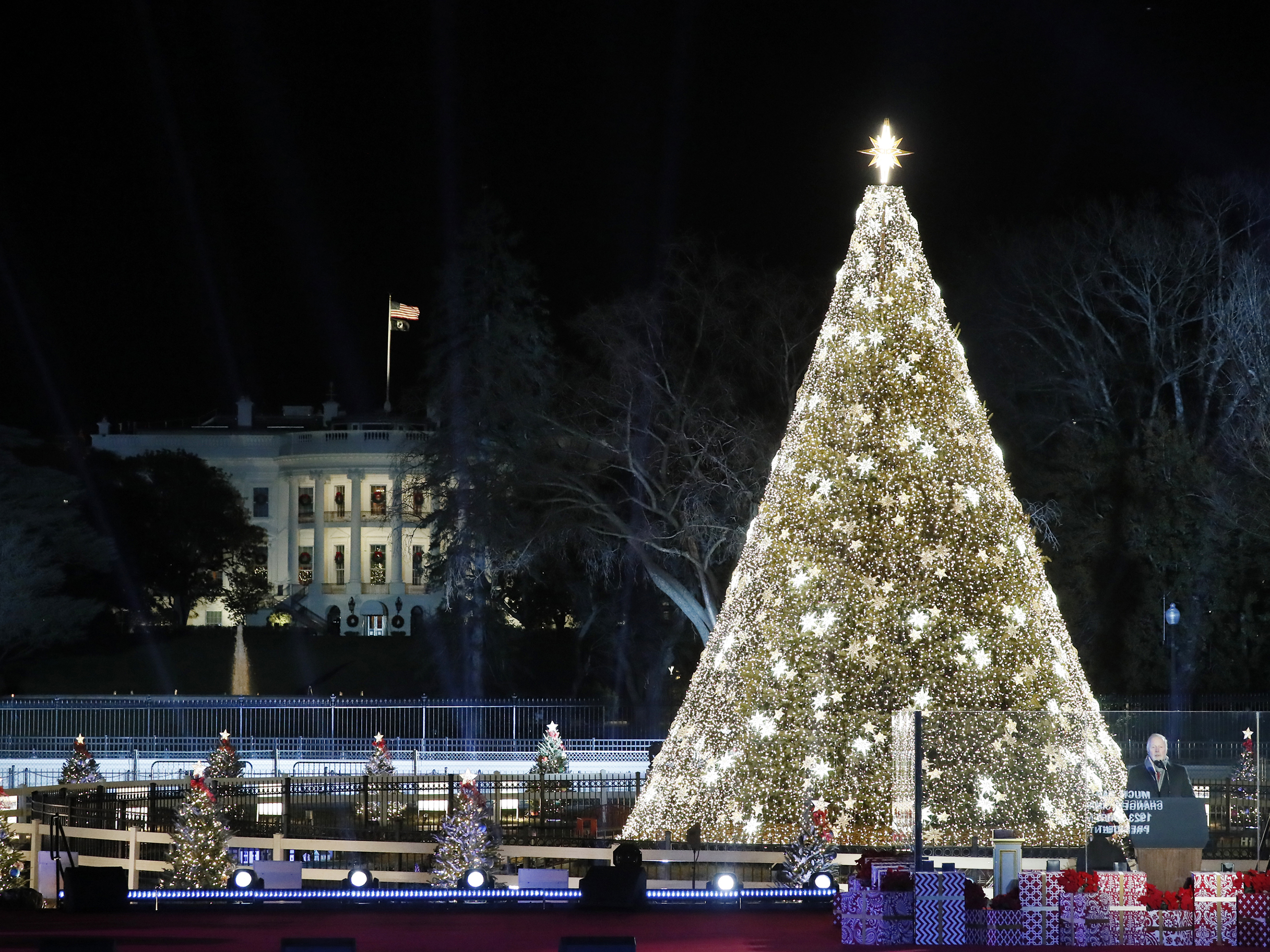