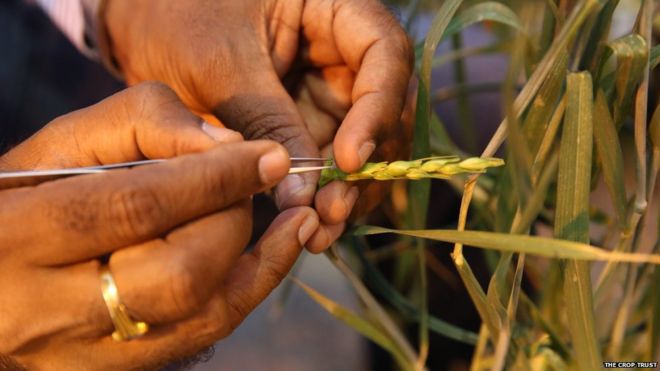 Wild wheat can be bred with modern crops to boost resilience.

Wild relatives of modern crops deemed crucial for food security are being pushed to the brink of extinction, according to the International Union for Conservation of Nature. More than 20 rice, wheat and yam plants have been listed as threatened on the latest version of the IUCN's Red list. The wild plants are being squeezed out by intensive farming, deforestation and urban sprawl, say scientists. Modern crops can be crossbred with their wild cousins to safeguard foods.

When a team of scientists analyzed two dozen environmental factors to understand bumblebee population declines and range contractions, they expected to find stressors like changes in land use, geography or insecticides. Instead, they found a shocker: fungicides, commonly thought to have no impact.

This November, Monarch Joint Venture (MJV) partner organizations came together at the University of Texas at San Antonio for two days of learning, planning for the next year of monarch conservation, and partnership building.

This month's e-newsletter includes articles about two research projects, new conservation guidelines (the result of a scientific collaboration), an encounter with North America's only carnivorous butterfly, and how you can support this work.

“A harmonious parade of monarchs were streaming across the sky. I have not seen such a massive arrival in years,” wrote Estela Romero on October 30th.

Read more about the monarch butterflies's arrival in Mexico...

Bees are in big trouble. The good news is that virtually all ecologically literate North Americans will tell you that. The bad news is they’re worried about the wrong bees — honey bees. North America could lose many of its roughly 4,000 native bee species. For example, applying criteria of the International Union for Conservation of Nature, the Xerces Society for Invertebrate Conservation reports that of the 46 indigenous bumble bee species in the U.S. and Canada 28 percent are at some risk of extinction. The U.S. Postal Service paid tribute to the beauty and importance of pollinators with stamps depicting two of our continent’s most iconic, the monarch butterfly and the western honeybee, each shown industriously pollinating a variety of plants native to North America.

“Bees, butterflies and other pollinators sustain our ecosystem and are a vital natural resource,” said U.S. Postal Service Judicial Officer Gary Shapiro. “They are being threatened and we must protect them.”

Restoration in the Understory

Goat's rue plants in the common garden at the Sandhills Research and Education Center. Photo by Joan Walker, USFS.

Read more about restoration in the understory…

Colorful Atlanta gardens are swarming with bees and butterflies thanks to the Greater Atlanta Pollinator Project (GAPP). The project encourages citizens to be friends to pollinators by planting native species and establishing community gardens in their neighborhoods and schools.

Researchers in a 40-year-old privet stand in the forest. Photo courtesy of the U.S. Forest Service.

Privet invades a forest quickly, sprawling across the understory and growing into thickets that crowd out native plants and change the very ecology of an area. Even if the woody shrub can be removed effectively, can a forest return to any semblance of its previous condition? Results from a five-year study published in 2014 by U.S. Forest Service researchers showed that not only can a thorough removal of privet last at least five years without a follow-up, but also that native plant and animal communities steadily return to areas cleared of the invasive shrub.

District employees at the Ruby Mountains Ranger District, Humboldt National Forest, Wells, Nevada, recently held a ribbon cutting ceremony for a pollinator garden on the district's grounds. They took a thirsty sod grass and converted it to a xeriscape with an array of pollinator friendly plants that are locally adapted to the drought conditions in the Central Basin and Range ecoregion.

The landscape that parallels roadways, like the I-35 corridor, can provide natural habitat to support the annual migration of the monarch butterfly. The Pollinator Partnership, including a number of state, local and federal government agencies, corporations, and organizations collaborating and supporting pollinators and conservation of their habitat developed this poster to celebrate the monarch butterfly.

The I-35 corridor follows Interstate 35 through six states from Minnesota south to Texas, following the central flyway of monarch migration. In 2016, these states signed a memorandum of understanding that informally named I-35 the “Monarch Highway” and agreed to implement coordinated management practices along the corridor that benefit monarchs and other pollinators.

On May 24, 2017, Secretary Sonny Perdue proclaimed June 19-25, 2017, as National Pollinator Week. Since 2007, the Secretary of Agriculture has increased public awareness of the critical role that pollinators play in the lives of Americans and the ecosystems we depend upon for our survival.

Animal pollinators, primarily bees and other insects, provide the critical ecosystem service of pollination. Eighty percent of all flowering plants depend upon pollination for reproductive success. This ecosystem service is critical to our national security and food security, as one in three mouthfuls of food depend upon pollination. Pollination is critical to maintaining the health and productivity of our national forests, grasslands, and agricultural lands.

The common Eastern bumblebee is one of 46 native bumblebee species in the U.S. Photo by Sam Droege, USGS.

Flowering plants and pollinators depend on each other. It’s a global truism, and it’s true on a 440 acre blueberry farm in northern Florida.

“Bumblebees are extremely efficient pollinators,” says U.S. Forest Service research ecologist Joseph O’Brien. “In the time it takes a honeybee to pollinate a single blueberry flower, a bumblebee can pollinate as many as six.”

Wild bumblebees—and there are 46 native bumblebee species—pollinate for free. But farmers often rent honeybees. Honeybees are trucked in when blueberry bushes bloom, and trucked out when the blooms fade. They crisscross the country on 18-wheelers, traveling from one crop to another.

Changes in Forest Conditions Have Contributed to Pollinator Decline

Forests in North America have changed rapidly over the past century. Before European settlement, forests were a mosaic of open pine and hardwood forests, prairies, and woodland savannas. Recent studies have found that forests with sun-filled openings and those with open canopies—where the branches from adjacent trees don’t touch or overlap—favor pollinators like bees and butterflies.

However, North American forests have shifted towards closed canopies, resulting in less light reaching the forest floor. Underneath the canopy, many of these forests have dense layers of shrubs. The changes have been profound and could be contributing to pollinator decline.

Maintaining and Improving Habitat for Hummingbirds in the Western U.S.

Trees provide an abundant and dense supply of nectar and pollen in one place. This allows bees to spend less energy searching for food. Trees that bloom in spring are important to support bees that have depleted their winter store of honey. Look up, next time you are walking around looking at wildflowers!

Visit the Pollinator Partnership to see the poster…

About one-third of the United States is covered in forests, but in places like Colorado, those forests are in danger. There's fire, pest infestations, and global warming to contend with—fortunately, there's hope. At the Charles Bessey Tree Nursery in Halsey, Nebraska, Forest Service biologist Richard Gilbert is on a mission to preserve and repopulate national forests in the Rockies. When disaster strikes, Gilbert's seasonal labors in raising trees for the repopulating mission go to good use.

See the YouTube video about the Charles Bessey Tree Nursery…

Their work guided restoration and conservation efforts, identified mislabeled reforestation material and unwanted hybrids between native and exotic species, and determined if tested plants were species and/or varieties that warranted special protection.