Our ongoing Challenge Cost Share agreement with the Chicago Botanic Garden continues to support the Forest Service in the preservation of native plants of concern within the Eastern Region.

On Friday, October 4, 2013, the Keweenaw Bay Ojibwa Community College (KBOCC) hosted the sixth Native Plants Restoration and Pollinator Protection Workshop. This workshop provided by the Kinomaage/ Zaagkii Wings and Seeds series, focused on the theme "Forest Products and Plant Restoration". Approximately 30 individuals from throughout the Upper Peninsula of Michigan attended the workshop.

Read more about the volunteers in the annual report (PDF, 1.8 MB)…

Read more about the Framework for Invasive Species Management…

Prized for its fleshy taproot and similarity to the Asian medicinal plant Panax ginseng, American ginseng has been harvested both legally and illegally and exported to international markets since the early 1800s. Overharvests for the international market as well as other factors such as deer browse and habitat destruction are thought to have led to range wide population declines. Research has been initiated to assess current management policy on eastern and southern national forests in relation to population levels to determine if permitted harvest is consistent with long term sustainability of American ginseng.

The Dixon National Tallgrass Prairie Seed Bank at the Chicago Botanic Garden collects and banks the seeds of rare and threatened plant species in northeastern forests in cooperation with the U.S. Forest Service.

The playground is buzzing with running and laughing children. One group of kids is slowing down and shouting, “We need more nectar, we're dying!”

On the 26th of April, the Philipsburg School [Montana] held an Earth Day event and students participated in informative pollinator programs, one of which was the game, Pollinator Mania.

I wanted to make sure that you were aware of the web page the Black Hills National Forest maintains every summer. It is called "What's Bloomin' in the Black Hills?" and features lists of the current blooming species along with links to photos. The lists and photos come from botanists and others across the Forest. I try to update the site every other week.

Forest Service is Aflutter with Native Plant and Pollinator Gardens

With a view of majestic mountains in the background, visitors to the Cranberry Mountain Nature Center of the Monongahela National Forest find themselves immersed in a bevy of beautiful plants in bloom and fluttering monarch butterflies. Beneath the natural grandeur, a very essential ecosystem service is taking place – pollination.

In celebration of National Pollinator Week, June 17-21, 2013, the Forest Service invites you to come and visit the beautiful gems called Native Plant and Pollinator gardens currently in bloom in the Eastern Region.

The Falls Creek area of the Chugach State Park, Alaska, is immensely beautiful and includes verdant forests, species rich shrublands, and a lively stream. The trailhead is about 20 miles east of Anchorage on the Seward Highway. On the evening of June 13, 2013, “Botany Challenge 49” was held. The hiking group sought to identify 49 species of native plants (Alaska being the 49th state) and to note the phenological state of each (vegetative, flowering, fruiting). There were eleven participants (9 people and 2 dogs) in the botany challenge event, which extended from sea level to about 1,200 feet elevation along the Falls Creek Trail in Chugach State Park.

The intent of the workshops is to assist indigenous leaders in reclaiming key roles as traditional caretakers of Great Lakes botanical ecosystems. The project is also a reminder to people that pollination is an essential ecological function. According to the Kinomaage website, “Over 80 percent of the world’s vegetables and fruits require a pollinator to produce. These pollinators include bats, butterflies, moths, flies, birds, beetles, ants and bees.” 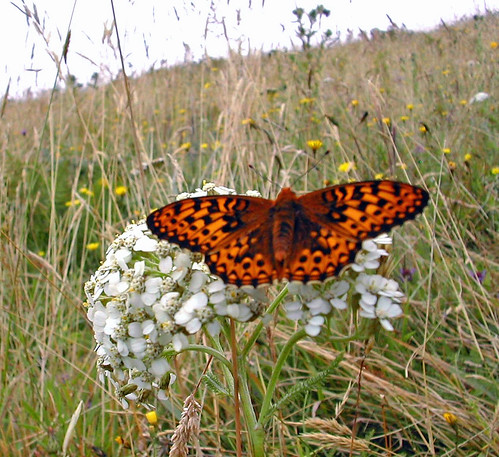 As the bartender drew pints of Silverspot India Pale Ale for the crush of people in the Pelican Pub and Brewery in Pacific City, Ore., recently, Michelle Dragoo, Siuslaw National Forest wildlife biologist, and Anne Walker, U.S. Fish and Wildlife Service biologist, prepared to tell the story of the butterfly that inspired the event. About 50 people grabbed a drink and a snack then settled in to listen.

Read about the Oregon silverspot butterfly on the USDA Blog…

The Interagency Native Plant Materials Development Program outlined in the 2002 USDA and USDI Report to Congress, USDI Bureau of Land Management programs and policies, and the Great Basin Restoration Initiative encourage the use of native species for rangeland rehabilitation and restoration where feasible. The Great Basin Native Plant Selection and Increase Project was initiated to provide information that will be useful to managers when making decisions about selecting appropriate plant materials and technologies for restoration. The Program is supported by the USDI Bureau of Land Management's National Native Plant Materials Program and the Great Basin Restoration Initiative and administered by the USDA Forest Service Rocky Mountain Research Station's Grassland, Shrubland and Desert Ecosystem Research Program.

Stories of Biodiversity on the Move, Monarch Butterflies (Danaus plexippus)

A Google Earth Tour is posted on YouTube describing the migration of monarch butterflies, and the people that help them out along the way. It was produced by Atlantic Public Media in cooperation with the Encyclopedia of Life. Producers: Eduardo Garcia-Milagros and Ari Daniel Shapiro.

The Forest Service announced the recipients of the 2012 National Forest System Invasive Species Program Awards on March 12, 2103. Each year, these national awards honor individuals and groups for outstanding work against aquatic and terrestrial invasive species threatening the National Forest System. Awards were presented for excellence in partnership development, prevention, early detection and rapid response, innovative control and management, and landscape-scale restoration and rehabilitation.

In the northeast, forests with entirely native flora are not the norm

Two-thirds of all forest inventory plots in the Northeast and Midwestern United States contain at least one non-native plant species, a new U.S. Forest Service study found. The study across two dozen states from North Dakota to Maine can help land managers pinpoint areas on the landscape where invasive plants might take root.

Many of us enjoy the beauty of wildflowers, but we may not know their names or how to identify them. This basic guide will help you identify sixteen pairs of common native wildflowers and bees of western Montana that provide vital pollination services. In this this guide, a bee is paired with a flower it is most likely to visit, but it may visit other flower types as well. From early spring through the fall, look for these wildflowers and bees as you walk along forest and grassland trails.

This brochure was prepared and published by the U.S. Forest Service Lolo National Forest, Missoula, Montana. Text is by Susan Reel, design and native plant illustrations by Nancy Seiler, and bee illustrations by Steve Buchanan.

National Wildflower Week will kick off a season-long festival of events highlighting wildflower appreciation, education, interpretation, and restoration activities. The Forest Service, Bureau of Land Management, and National Park Service, along with all of our partners who participate in the Federal Interagency Plant Conservation Alliance, will join together to celebrate the diversity of plants and plant habitats found on the Nation's public lands. 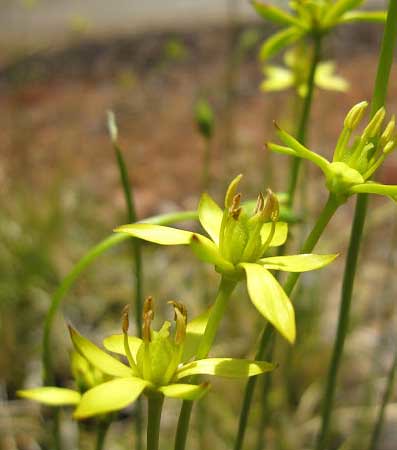 Harper's beauty is a perennial lily with a solitary yellow flower and iris-like leaves and is listed as federally endangered (U.S. Forest Service photo).

The first week of March found a team of plant biologists down on their knees in a highway right-of-way in the Florida Panhandle searching for Harper's beauty, one of Florida's rarest native plants.

A perennial lily with a solitary yellow flower and iris-like leaves, Harper's beauty (Harperocallis flava) is listed as federally endangered and found in only three Panhandle counties, with most plants growing in the Apalachicola National Forest.

Volunteers from the U.S. Forest Service, its Southern Research Station, the U.S. Fish and Wildlife Service, the Florida Department of Transportation, and Florida Natural Areas Inventory were there to take the first step in a project to move the endangered plants from the roadside to a more secure home.

This winter in Alaska has been particularly warm. At sea level, rain rather than snow has dominated the precipitation. Instead of crisp, snowy winter days, we're experiencing soggy, drippy weather. The temperature is warm enough that the early blueberries are beginning to flower. Because this is very early for flowering, a hard freeze later in the winter could destroy the budding plants and threaten the berry crop.

Read more about the Tale of Alaskan Winter Weather…

Since the early 1990s, the Hiawatha National Forest has operated a greenhouse in Marquette, Michigan. The idea is to provide both native seeds and seedlings for successful restoration of sites impacted by logging or disturbed by other land management activities. For instance, when aging culverts are replaced, native plants can be introduced to re-vegetate disturbed soil. Seeds and seedlings are also used to enhance existing wildlife habitats.

Volunteers provide the workforce to restore native habitat throughout Idaho, collecting seed and planting since 1990 when Idaho Fish and Game initiated its volunteer program. Since then, thousands of volunteers in the southwest have planted nearly three quarter of a million bitterbrush and sagebrush seedlings to restore the native shrubs on burned winter ranges for deer, elk and pronghorn. During summer months, volunteers collect seed from native plants including forbs, grasses, and shrubs for restoration work by the Boise National Forest and the Idaho Fish and Game.

Some seed is used by the U.S. Forest Service Lucky Peak Nursery, 15 miles east of Boise, to propagate seedlings that volunteers plant. The seed is taken to the nursery and spread on drying racks. Nursery employees clean the seed. Seeds sown in May of one year are ready to plant as seedlings the following spring.

Imagine a place where the air is laden with intoxicating scents of flowers in bloom, a place where treasures wait to be found, where countless butterflies swirl like fluttering jewels amidst bees and diurnal moths, all against a backdrop of vibrant green.

Sound too good to be true?

White Mountain National Forest wildlife and botany staff finished the 2012 field season with a total of 73.2 acres of Non-Native Inavasive Species treatment on the Forest, exceeding the target by 55%.